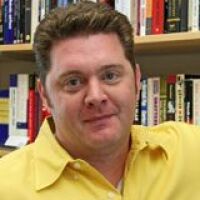 Dr. Andrew L. Johns, Associate Professor of History, received his Ph.D. from the University of California, Santa Barbara in 2000 and joined the faculty at Brigham Young University in 2004. His research focuses on U.S. foreign relations during the Cold War, with a particular interest in the presidency and the relationship between domestic politics and foreign policy.

Dr. Johns is the author or editor of six books, including, most recently, The Price of Loyalty: Hubert Humphrey’s Vietnam Conflict. His current research projects include Breaking the Eleventh Commandment, a book on Representative Pete McCloskey’s (R-CA) opposition to the Vietnam War; a foreign relations biography of Senator John Sherman Cooper (R-KY), the former U.S. senator who also served as U.S. ambassador to both India & Nepal and the German Democratic Republic; an edited volume on post-conflict U.S. diplomacy since 1783; and a global history of 1972.

In addition to his research, Dr. Johns has served as editor of Passport: The Society for Historians of American Foreign Relations Review since 2011. He is also general editor of the Studies in Conflict, Diplomacy, and Peace Book Series, published by the University Press of Kentucky, and he has been invited to lecture to audiences across the country about his research, contemporary foreign policy issues, and the historical profession. He served as President of the Pacific Coast Branch of the American Historical Association in 2018-2019 and currently serves on its governing council and executive committee. He also serves as a member of the governing council for the Society for Historians of American Foreign Relations through 2021