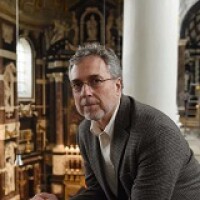 Born and raised in California, Craig Harline earned a Ph.D. in European History from Rutgers University (1986). Since 1992 he has been a professor of History at Brigham Young University, teaching courses on the Reformation, the History of Civilization, History of Christianity, and such seminars as “Miracles” and “Toleration and Persecution.” In 1996 and 2001 he was also visiting professor and research fellow at the Catholic University of Louvain in Belgium, in 2006 research fellow at the University of Antwerp, and in 2011 research fellow at the Belgian Academy (VLAC) in Brussels. His research focuses on the religious history of Europe since the Middle Ages, which he has pursued in archives of Belgium, the Netherlands, France, England, Germany, and Sweden, thanks to grants from the National Endowment for the Humanities, the American Philosophical Society, the American Council of Learned Societies, the Catholic University of Louvain, the University of Antwerp, the College of FHSS at BYU, and other agencies. His publications have been reviewed in mainstream and academic media alike, and he has been interviewed on various radio and television programs in the US, Belgium, The Netherlands, and Ireland.